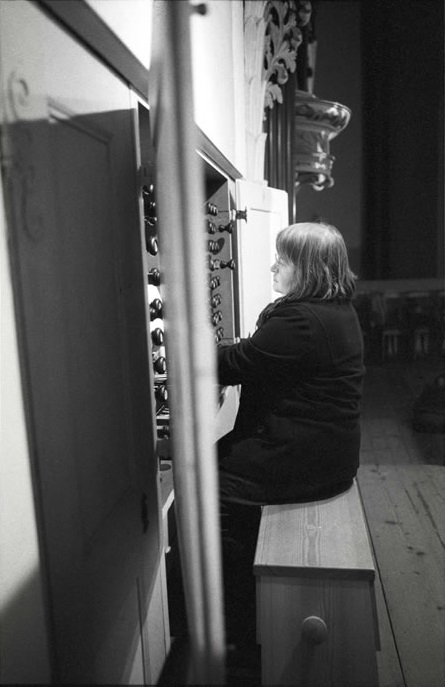 Florence Rousseau is particularly indebted to Jean Boyer, Liesbeth Schlumberger and Louis Thiry for their tuition and help. She was born in Cherbourg and began to study music at Rouen University, and at the Conservatoire in that city, where she later obtained a first prize for advanced organ studies.

After a further period at the Conservatoire National Supérieur de Musique in Lyon, she graduated in 1998 with a highly commended Diploma National d’Etudes Supérieures Musicales.

She rounded off her early music studies by having tuition for the harpsichord, figured bass, continuo-playing and chamber music with Bibiane Lapointe and Thierry Maeder at Caen Conservatoire, obtaining a gold medal for harpsichord performance.

Florence Rousseau has attended several specialised courses and musical academies during which she received help and advice from Odile Bailleux, Jan-Willem Jansen, Mickaël Radulescu and Aline Sylberajch. She has also undertaken the study of hymnology with Professor James Lyon who has developed her keen interest in England’s music and its history.

Florence Rousseau is organist at Rennes Cathedral and holder of the prestigious Certificat d’Aptitude diploma for organ-teaching. She regularly gives recitals in France in addition to her concert work in Germany, England, Belgium, Luxembourg and the Netherlands.

For several years she has been invited as a resident associated musical adviser at the Bach Academy of Arques-la-Bataille in Normandy. This collaboration involves organising guided tours of historic instruments in Germany and the Netherlands, particularly those made by Silbermann and Schnitger, for example during visits to Freiberg & Leipzig, Hamburg & Stade, and Groningen & Norden.

Since 2011, she and Loïc Georgeault have shared the organisation of La Route des Orgues en Pays de Saint-Malo, offering concerts and activities to demonstrate the wealth of instruments in the town and its neighbourhood.